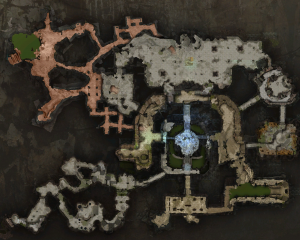 Rytlock is located at the entrance of the instance. Talk to him to start your story.

In order to get to Eir Stegalking you need to do several things first.

3. Go up the stairs and search for the sword

There are many mobs in the room, so use your AOE abilities wisely. All party members should find good positions, since Ascalonian Captain (Lieutenant) has Knockdown ability and will knock you down from the platform.

4. Draw out King Adelbern by defeating his lieutenants

Defeat Master Nente
Master Nente abilities: Ranged Attacks, Confusion on CC
Boss behavior: Master Nente is located in the middle of the room on the platform, so spread out to avoid his ranged AoE attacks. With every 20-30% HP decrease, he jumps to the outside platform and summons adds. Defeat them as soon as possible, or control them while defeating the boss, repeat this until he is dead. Use rocks (boulders) to knock him down for a while, it will make the fight substantially easier.

Defeat Ralena and Vassar
Ralena abilites: Casts Lighting, Summons Lightning Storms, Stronger Near Vassar
Vassar abilities: Creates Illusions, Stronger Near Ralena
Bosses behavior: Ralena has devastating ranged lighting abilities, while Vassar is melee boss, easy to kite. The bosses are much stronger together, thus, keep them far away from each other. The room is large enough with lots of places where one of your party member can drag the Vassar and kite him easily. The illusions he summons do ranged high damage attacks, thus, kill them as soon as possible. The rest of the party members should be focused on Ralena and keep an eye on the party member who kites Vassar if he needs healing or help while defeating illusions.

Defeat Kasha Blackblood
Kasha Blackblood abilities: Summons Minions, Fears, Applies Conditions
Boss behavior: Kasha Blackblood is also ranged boss that summons adds, casts conditions on players and AoE red circles. When she summons the adds try to kill them as fast as possible and also try to avoid AoE circes on the ground. After defeating the adds all party members shoud focus on Kasha. Also don’t forget to remove conditions whenever you can.

King Adelbern abilities: Pulls Enemies Close, Summons Foefire
Boss behavior: He is stationary mob with devastating abilities, but it can be a pretty simple boss if you respect the following rules: Spend your endurance wisely because when he pulls you to him you will have to dodge out of his embrace fast. When he pulls enemy towards him he does a devastating AoE attack that will almost one shot you. During the fight he will turn to one of the party members and summon Foefire (devastating red AOE circle dmg) using a noticeable animation that can usually one shot person if you stay in the circle. If you don’t do it properly you won’t be able to dodge (due to the lack of endurance) after his Pulls Enemies Close ability.