Home » guide » Path of Fire Raptor Mount – Where to Find

Path of Fire Raptor mount is the first mount that you obtain in Guild Wars 2: Path of Fire. You can live through all your Jurassic Park-fueled fantasies you had as a kid. The raptor can jump far, smack enemies with its tail, and more. Investing Mastery Points will buff the things he can do even further. The raptor will be essential to solving some early-game puzzles, too, and even to unlocking the second mount. With that in mind, we’ve put together this guide, telling you how to get Raptor mount in Path of Fire. 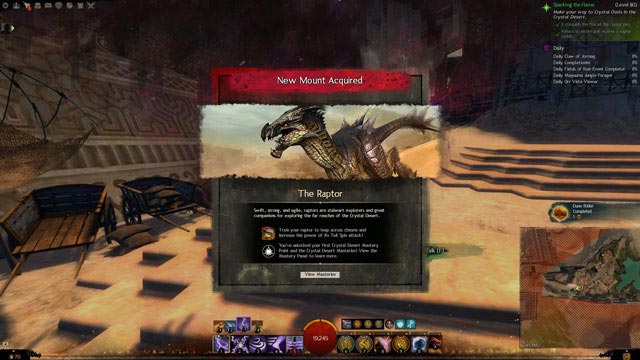 How to unlock Raptor Mount in GW 2 Path of Fire?

Unlocking the raptor is pretty much inevitable. As you play the main quest, pretty soon after the prologue, you’ll get a mission where you must rescue raptors. After you save them and the villagers, you’ll have to save the village from the fires. The game will then prompt you to have a chat with Aksim, and that’s how you get your raptor mount. From there, you can use your first mount to go and explore areas that were previously unavailable to you. Get to know the raptor well; he’ll be your best friend for a good while. 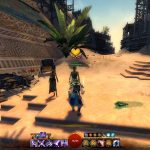 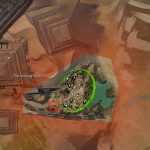 Masteries for the Raptor

Even though the raptor is your first mount, its still really, really useful. He can leap great distances, hit enemies with his tail spin, and more. You also can’t unlock the Springer mount without it. The abilities are as follows: Ravenous Strike (boosts tail spin damage), Round Up (pulls in enemies with tail spin), Canyon Jumping (increased jump distance), and Ravenous Discipline (all other mounts get Ravenous Strike). It’s pretty awesome that in Path of Fire, boosting your mount actually gives bonuses to other mounts, too. So, wherever you invest your Path of Fire Mastery Points, all your mounts will benefit.