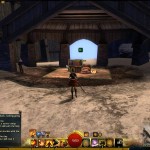 There are two types of Siege weapons: Offensive and Defensive Weapons. Siege weapons can only be used by the team that created them. When you equip it, it will change the first five skills on your skill bar. The opponents can attack, damage / destroy the structures. If the weapon is destroyed you can rebuild it. 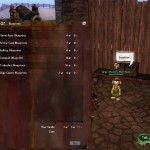 To build an Offensive siege weapon you need a blueprint and some supply. You can buy blueprints from a Siegemaster NPC who is located within your “home base” area on each map . Blueprints are also available as drops from guards and dolyaks. Currently, blueprints cost between 4 silver and 1 gold depending on the type (info from BW2).

When you double-click the blueprint, your skill bar will change to a ground-targeted skill so you can select where you’d like to place the build site for your weapon. The construction site will appear wherever you click. Anyone in your team can help with the construction by adding their supply to the site. Each player can carry up to 10 supplies at a time. With the exception of the siege golem, all siege weapons are stationary and cannot be moved. 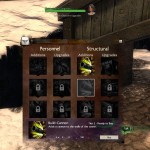 Each objective has its own supply depot that sends a dolyak caravan out to deliver supplies to surrounding towers and keeps. If you use up all supply in the depot, you’ll need to escort adolyak caravan so it can deliver more supply to the depot.