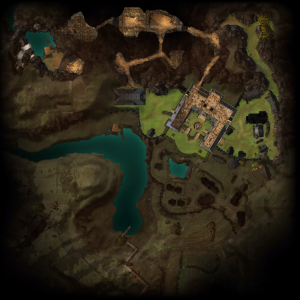 2. Talk to the party-goers and search for clues

Talk to people in the yard (the ones with marks above their heads) and pick one of four given options in a dialog, it will slowly fill up Rumors Gathered bar.

Boss behavior : Melee boss with a couple of melee attacks like fist punch and AoE fire blast, and devastating range attacks like laser shots and rocket attacks.
Try to avoid his melee AoE fire blast whirlwind (stay out of his range when he starts to spin) and dodge ranged rocket attacks (or just hide behind the walls or use projectile reflection abilities). The rockets are fast, do high damage, and you never know where they are going to hit. Everything else is a tank and spank boss fight.

It’s a shiny trail you can see on the ground, it leads you to the other objectives in the instance.

Find the queen and the missing ambassadors.

Wake Sigfast
Sigfast is surrounded by three separatists. The Fighter is regular mob while the Lieutenant and the Sergeant are ranged mobs. Separatist Sergeant makes more damage to moving target. When you defeat Separatists, Sigfast will wake up and open the door which leads you to the next instance objectives.

Free Mia Kindleshot
The next objective at this dungeon requires killing a few packs of mobs, some of them patrol along the way, and some of them, Separatist Snipers, are placed at the top of the hill and at the trees as well. Try to pull and defeat the patrols first while keeping the distance from Separatist Snipers, since they have long-range attacks. After that free Mia Kindleshot from the cage and she will lead you to the queen.