Ranger Pet takes an active role in combat by providing damage or interactive skills for the player. During the character creation, each race offers three different pets, from which a ranger can choose one starting pet. Pet’s type determines which environments the pet is able to fight in: aquatic (underwater), terrestrial (land) and amphibious (can fight both on land and underwater). Rangers have two terrestrial and two aquatic pet slots. Amphibious pets can occupy either terrestrial or aquatic slots.

How to get a new pet? 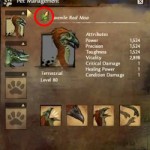 A ranger can charm (by pressing F) only animals with a name in the form “Juvenile < pet species >“. Once you charm a pet, you can access the pet management panel (by pressing K) where you can rename your pet and view its statistics. To rename a pet, click on the quill icon to the left of the pet name.

A pet’s level always match the ranger’s level, so you don’t have to waste your time on leveling a new pet. If your pet is defeated, you can switch to another pet by pressing F4. A defeated pet that was swapped out will be at full health when it is swapped back in.

Pet interaction bar
A pet command / interaction bar is located above the weapon skill bar. The ranger has limited control over the actions of their pet:

Active — Attack what I am attacking.
Passive — Don’t attack.

Family: Boar – knocking your enemies down

Family: Canine – knocking down foes, slows the enemy’s movement by 50%