Home » guide » Path of Fire How to Get Springer Mount

Springer mount is one of the animals you can ride in GW 2: Path of Fire. It is the second mount you can get in the game, and it’s essentially an enormous rabbit. It can jump high into the air, decrease fall damage you take, and knock enemies down. To unlock it, you’ll have to do some chores for the breeder, in a specific region. Our guide on GW 2 Path of Fire Springer Mount explains exactly how to obtain it. 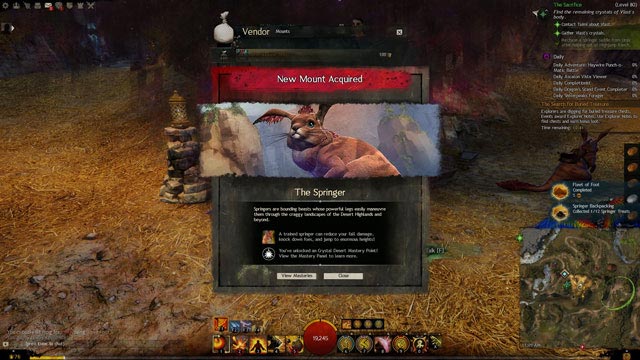 Where to Find Springer Mount in Path of Fire?

The springer mount can be found in the Desert Highlands area, which lies beyond the large canyon west of Auburn Hills. However, you won’t be able to jump over the canyon, and for that, you’ll need to obtain a raptor mount. That’s not that big of a problem, since you get one near the beginning of the game. Then, spend your Path of Fire Mastery Points to upgrade your raptor up to the point you get Canyon Jumping as a skill. Leap over the canyon and keep going down the road, and you should end up in Highjump Ranch. Talk with Stablemaster Unja, and she’ll give you some stuff to do. Completing her tasks will also complete the Jump for Joy quest. You’ll then have the option to buy a springer for one gold and fifty trade contracts. The springer is an adorable creature, which makes sense, considering they’re basically really big bunnies that you can ride. Their abilities are pretty much what you’d expect. Springers can jump really, really high up, opening up a lot of areas you’d have had trouble reaching otherwise. They can also knock enemies down, and you’ll take way less fall damage while riding the big bun-bun. The abilities are Fortified Descent (reduces fall damage), Forceful Impact (cannonballing into enemies), High Vault (jumping even higher) and Masterful Descent (Fortified Decent for other mounts, as well). Yup, Path of Fire mounts masteries can boost other mounts, too!

2 thoughts on “Path of Fire How to Get Springer Mount”