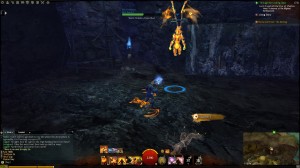 This is quite easy puzzle, where you can expect more swimming parts through the caves than performing tricky jumps.

Guide through the puzzle

Once you enter the cave, follow the path until you reach “Greed is dangerous” sign. You will come across a few scales on your way, which you can easily avoid. Dive into the water behind the sign.
Note: Don’t bother to jump onto rocks to reach a chest in this room, because it is a booby trap.

Opening to the next part of the cave.


After passing the first room with ghosts, you’ll enter a huge area with 4 unlit ancient torches. You need to lit all four torches to spawn Veteran ghost. Defeating him will open an underwater passage.
Note: After a short time, two or three minutes, torch flame will extinguish, thus, make a good plan in which order you will lit the torches.

Underwater passage. Watch out for sharks.


Next step is quite easy. Just avoid falling rocks while climbing up.

Avoid red circles on the rocks while climbing up.


Once you exit the cave, take Phil Thackeray’s Magical Moa Feed. Use Speed Burst ability to jump over a gap, toward the chest. After the jump, use drop bundle option (default key should be [‘]) and place moa seed as far as possible from the chest. Moa will run for the food, and that will give you additional time to open the chest.

Take seeds from the ground.

Use ability to jump across.

Drop seeds far away from the chest.